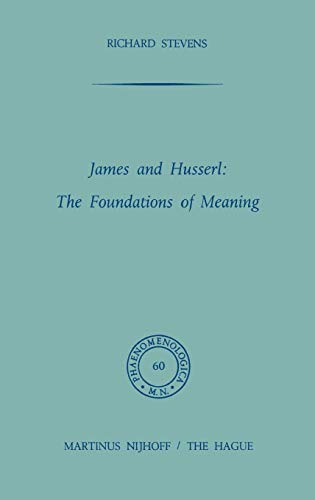 James and Husserl: The Foundations of Meaning [Phaenomenologica, 40] - gesigneerd exemplaar

" ... a universe unfinished, with doors and windows open to possibilities uncontrollable in advance." 1 A possibility which William James would certainly not have envisaged is a phenomenological reading of his philosophy. Given James's personality, one can easily imagine the explosive commen­ tary he would make on any attempt to situate his deliberately unsystematic writings within anyone philosophical mainstream. Yet, in recent years, the most fruitful scholarship on William James has resulted from a confrontation between his philosophy and the phe­ nomenology of Husserl. The very unlikelihood of such a comparison renders all the more fascinating the remarkable convergence of perspectives that comes to light when the fundamental projects of James and HusserI are juxtaposed. At first view, nothing could be more alien to the pragmatic mentality with its constant mistrust of any global system than a philosophy whose basic drive is to discover absolute knowledge and whose goal is to establish itself as a certain and universal science.

Gedetalleerde informatie over het boek. - James and Husserl: The Foundations of Meaning