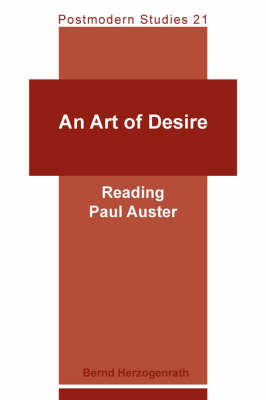 An Art of Desire. Reading Paul Auster the first book-length study solely devoted to the novels of Paul Auster. From the vantage-point of poststructuralist theory, especially Lacanian psychoanalysis and Derridean deconstruction, this book explores the relation of Auster's novels City of Glass, In the Country of Last Things, Moon Palace, and The Music of Chance to the rewriting and deconstruction of genre conventions; their connections to concepts such as catastrophe theory, the sublime, Freud's notion of the 'death drive;' as well as the philosophical underpinnings of his work. At the focus of this study, however, is the concept of desire, an important concept in the writings of both Auster and Lacan, and the various manifestations of this concept in Auster's novels. Auster's novels always emphasize a kind of outside of the text (chance, the real, the unsayable), a kind of hope for a 'transparent language,' a hope, however, that is exactly posited as impossible to fulfill. The relation of Daniel Quinn, Anna Blume, Marco Fogg and Jim Nashe to this lack is the motor of their desire, the driving force for the subject that has always already left the real and has been inscribed into the representational system called 'reality.' It is here, in its relation to the signifier, that the subject's desire is played out, that its experience is ordered, interpreted, and articulated. It is their ability to make connections, to proliferate, to 'affirm free-play,' their ability 'not to bemoan the absence of the centre' that ultimately decides over success or failure of Auster's subjects - whether they partake in the 'joyous errance of the sign,' or whether their fate is that of the 'unfortunate traveler.'

Gedetalleerde informatie over het boek. - An Art of Desire