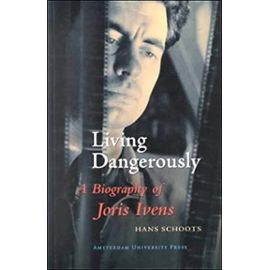 The Dutch film maker Joris Ivens (1898-1989) was one of the founding fathers of documentary film. The career of this eternal traveller spanned over sixty years, from his first film in the twenties to his last, finished at the age of ninety. Among Ivens's friends and collaborators were leading filmmakers and actors like Eisenstein, Pudovkin, Dovzhenko, Chaplin, Milestone, Capra, Losey, Flaherty, Grierson, De Santis, the Taviani brothers, Signoret, Montand and Marker. In his early years Joris Ivens was a prominent figure in the international film avant-garde. From the thirties onwards he became, according to American film historian Robert Sklar, 'the most important political filmmaker of the decade, probably of the century'. His films on Soviet socialism, the Spanish Civil War, the Indonesian struggle for independence, the Vietnam-war and the Cuban and Chinese revolutions, make him a subject of controversy in any debate on the relationship between art and propaganda.Hans Schoots has based his biography on new research of Ivenss complete filmwork and of unknown production-documents, personal letters and diaries, found in many archives, such as Ivens's FBI-dossier and State Archives in Moscow and former Eastern-Berlin. Artistic and political milieus in Amsterdam, Berlin, Moscow, New York, Hollywood, Paris, Havana, Hanoi and Beijing provide the background of this fascinating life-story. This is the volume 11 in the Amsterdam University Press series "Film Culture in Transition," edited by Thomas Elsaesser.