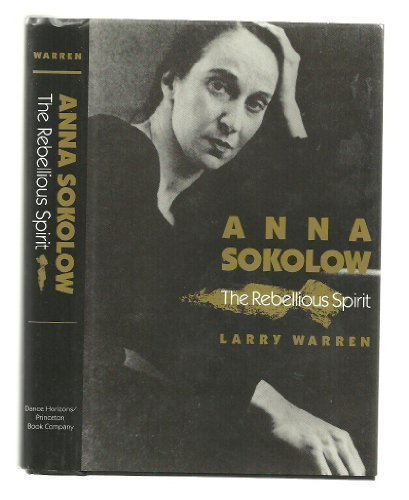 Born in 1910 of Jewish immigrant parents, Anna Sokolow by the early 1930s was a highly valued member of Martha Graham's first company. While performing for Graham, she began to create her own dances focused on the evils of fascism, war, and social injustice, and was soon recognized as one of the outstanding young choreographers of the new generation. Then she began to travel.
First there was a visit to the Soviet Union in 1934 to perform as a soloist. Then a successful 1939 season with her group in Mexico led to an invitation to start the first modern dance company there. In the early 1950s Anna helped to ready Inbal, Israel's Yemenite dance company, for world touring, and later she established her own Israeli dance company, Lyric Theatre. She continues to work in Israel and Mexico and has been honored in both countries for her many contributions.
This audacious and passionate woman never entered into a conventional marriage but has had long-lasting relationships with a brilliant composer, Alex North; a gifted Mexican painter, Ignacio Aguirre; and a fine actor, John Silvester White.
For more than thirty years Anna has taught and choreographed at the Juilliard School's Dance Division, teaching young artists to demand of themselves the fullest and most honest expression of human emotion in their dancing. She has made those same demands in her movement classes for actors, first at the Actors Studio and later at the HB Studio. Anna has directed several fine New York-based dance companies, including her present group, the Players Project, and has been involved in such notable Broadway shows as Candide, Camino Real, and Hair.
Anna's works for the concert stage have frequently reflected the themes of loneliness, injustice, and alienation, using jazz as a symbolic pulse. Looking unflinchingly at the darker sides of experience, she has created such modern dance masterpieces as Rooms and Dreams, and for the Joffrey Ballet, Opus '65.
Anna Sokolow: The Rebellious Spirit is more than chronology; it is a compelling assessment of a highly varied career and a passionate style of movement that continues to engage and affect audiences and dancers around the world. This critical biography illuminates the life and art of Anna Sokolow within the context of the turbulent artistic and political milieu in which she has lived, and out of which she has carved her role as a seminal figure of modern dance.