Christo and Jeanne-Claude: Over the River. Project for Arkansas River, State of Colorado [SIGNED] - gesigneerd exemplaar 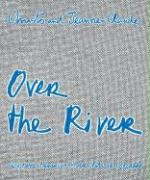 In 1992, the infamous environmental installation artists Christo and Jeanne-Claude took their first trip west in search of a site for a new temporary artwork--in this case, a stream of successive transluscent fabric panels that would be suspended for two summer weeks across the banks of a Rocky Mountain river, high enough above the water to allow kayakers, rafters or pedestrians to drift along below it, and close enough to a road that the piece could be approached and enjoyed by car or bus. On subsequent trips they investigated the headwaters of 89 rivers in six states, logging 14,000 miles onto thier odometer, until they finally settled on a site along the Arkansas River in the state of Colorado. Then they began the arduous process of getting permission from all of the necessary local beaurocracies and activist groups. This book documents the process from 1992 until 2005, at which point the artists were still only half-way there. (The project will not come to fruition until the year 2010 at the earliest.) As with all previous projects, Over the River is financed entirely by Christo and Jeanne-Claude through the sale of preparatory work. These drawings, lithographs, collages and scale models are presented here, together with comprehensive documentary photographs.

Gedetalleerde informatie over het boek. - Christo and Jeanne-Claude - Over the River: Project for Arkansas River State of Colorado